A WALK THROUGH THE MASS: A STEP-BY-STEP EXPLANATION – 5 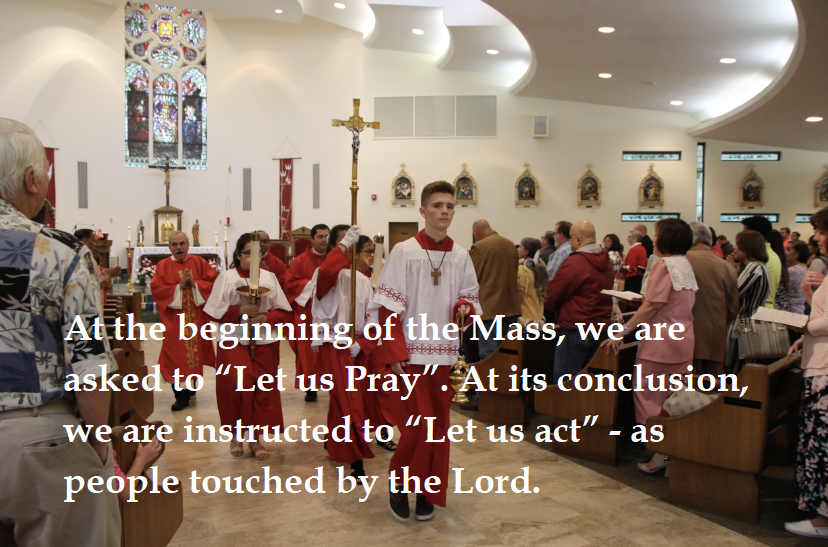 The fourth part of the Mass is the Concluding Rites which consist of announcements (if required), the final or solemn blessing, the dismissal, the procession and recessional chant.

The Concluding Rites prepare us to be sent back out into the world to live the Gospel. We prepare to go back to that world in which we will live for the coming week. The burdens we have laid down at the door of the church for this Eucharist, we know we must now bear again—but now strengthened by this Eucharist and this community.

The priest again says, “The Lord be with you”—the ritual phrase serves now as a farewell.

The Final or Solemn Blessing: Before dismissing the people, the priest offers them God’s blessing. A blessing is a sign of God’s protection over our lives and activities for the coming week. It is also a reminder that God walks with us in our journey of life. On Solemnities, the final blessing takes a more solemn form when the deacon invites the people to bow their heads and a threefold blessing is prayed over the people by the priest. When a Bishop offers the blessing, he always makes the Sign of the Cross three times as he mentions the Persons of the Trinity.

The Dismissal: The Dismissal is the final dialogue of the Mass and is begun by the deacon if present, who sends the people forth from Mass into the world. We leave the assembly and the church building—but we carry something with us. What happens in our lives during the week gives deeper meaning to the ritual actions we have celebrated at Mass, whether it’s family, work with poor or just plain work. It is only in relation to our daily lives that the full meaning of the ritual actions of the Mass becomes clear to us.

The Procession: Following the dismissal, the priest and deacon once again show reverence for the altar by kissing it, just as they did upon entering the sanctuary at the beginning of Mass. The kissing of the altar is a sign of honor to the Lord for the sacrifice he made upon the cross, which is now made present to us on the altar. They then genuflect to the Blessed Sacrament in the tabernacle and process down the aisle with the altar servers.

Just as in the procession at the beginning of Mass, this procession reminds the people that the priest is the shepherd of the parish community, who journeys with them in the struggles and joys of life. Out of respect for the priest who represents Christ the Good Shepherd and to maintain order and decorum in the church, the faithful never leave before the altar servers and priest have first exited the church.

The Recessional Chant/Hymn: Although a recessional chant is not necessary, when it is sung, it does form the final part of the Mass and accompanies the procession of the servers and the priest out of the church, therefore none of the faithful should ever leave the church before the recessional chant/hymn has concluded so that they may fully participate in the celebration of Mass.

Personal Prayer: Following the conclusion of the recessional chant, it is customary for all the faithful to kneel and pray silently in thanksgiving for God’s blessings and for the grace to live the Gospel during the coming week. After this time of personal prayer, the faithful depart the church to joyfully live out the Gospel with renewed faith, hope and charity.

During Jesus’ walk to Emmaus with two disciples, they invited him to come and stay with them. He did. During their meal together, “their eyes were opened” and they recognized who he really was―the risen Messiah. Later when he disappeared from their midst, they said to each other: “Were not our hearts burning within us while he spoke to us on the way and opened for us the scriptures?” (Lk 24:13-32). May our hearts burn within us as we listen to God’s Word, and the eyes of our souls be opened so that we recognize the awesome gift we receive at Mass.

Click below to read the rest of this 5 part series on the Eucharist...

A WALK THROUGH THE MASS: A STEP-BY-STEP EXPLANATION – 1

As Catholics, we know that the Holy Mass is the center of our faith and the source of divine life. Hence, the Church teaches us to participate in the Holy Mass regularly on Sundays and on Holydays of obligation and also on weekdays, whenever possible. If we understand...

END_OF_DOCUMENT_TOKEN_TO_BE_REPLACED

A WALK THROUGH THE MASS: A STEP-BY-STEP EXPLANATION – 2

Part two: Story telling/ Liturgy of the Word Liturgy of the Word: When we gather at a friend’s home for a meal, we always begin with conversation, telling our stories. At Mass, after the rites of gathering, we sit down and listen as readings from the Word of God are...

END_OF_DOCUMENT_TOKEN_TO_BE_REPLACED

A WALK THROUGH THE MASS: A STEP-BY-STEP EXPLANATION – 3

Part three: Meal sharing/ Liturgy of the Eucharist After the readings, we move to the table. As at a meal in the home of a friend, we 1) set the table, 2) say grace and 3) share the food (we eat and drink). At Mass these ritual actions are called 1) the Preparation of...

END_OF_DOCUMENT_TOKEN_TO_BE_REPLACED

A WALK THROUGH THE MASS: A STEP-BY-STEP EXPLANATION – 4

The Communion Rite The Liturgy of the Eucharist continues with the Communion Rite when the faithful immediately prepare themselves to receive the Body and Blood of Christ. The Lord’s Prayer is offered, signs of peace and reconciliation are made, the consecrated Host...