A WALK THROUGH THE MASS: A STEP-BY-STEP EXPLANATION – 4 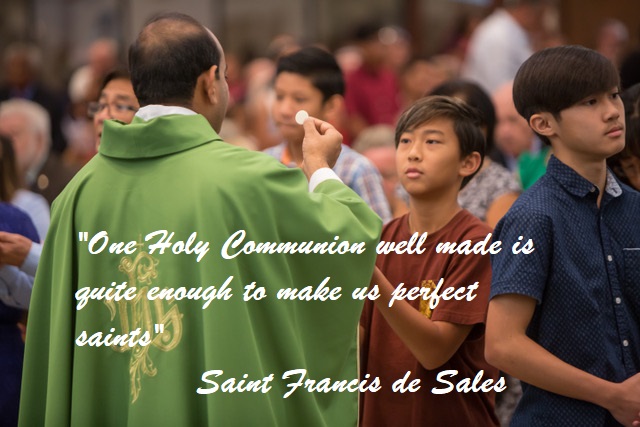 The Liturgy of the Eucharist continues with the Communion Rite when the faithful immediately prepare themselves to receive the Body and Blood of Christ. The Lord’s Prayer is offered, signs of peace and reconciliation are made, the consecrated Host is broken and prepared for distribution.

The Lord’s Prayer: The Gospels illustrate that Jesus was a person of deep prayer and his disciples were amazed at his ability to pray. After being asked to teach them how to pray, Jesus gives them his own prayer.

The Lord’s Prayer is the perfect prayer: offering praise to God, imploring surrender to God’s will, petitioning for our daily bread (signified by the Eucharistic Bread), forgiveness of sins and the strengthening of the soul against temptation and evil.

“Deliver us, O Lord…”: Following the Lord’s Prayer, the priest prays that the entire community may be delivered from every evil and all distress as it awaits the second coming of Christ. This prayer is called the “embolism” as it develops the last petition of the Lord’s Prayer.

This prayer is based upon Titus 2.13 which is the second reading for Christmas Midnight Mass. It reminds us that Jesus will come again and until that time, he will protect us from the dangers and temptations that we encounter in life.

“For the kingdom…”: The embolism prayer ends with a doxology that is well known among Protestant Christians, but that Catholics did not retain as the conclusion to the Lord’s Prayer. This doxology “For the kingdom, the power and the glory are yours now and for ever” was in use as a conclusion to the Lord’s Prayer in the early Church and it was restored to the Mass for  several reasons: this prayer was part of the early tradition of the Catholic Faith, it is biblical in nature, for ecumenical reasons and to add another element of participation for the people.

The Rite of Peace: The Rite of Peace begins with the priest asking Jesus, the Prince of Peace, to bestow his peace on the community just as he once did upon the Apostles when they were gathered in the upper room (see John 20.19-23). While the priest says this prayer alone, the people assent to it by their “Amen.”

The Exchange of Peace: The sign of peace is then exchanged by all present. This practice comes directly from Scripture (Matthew 5.23-24) where Jesus admonishes his followers to be reconciled with one another before offering their gift at the altar. From the very beginning, this practice was a very important element of the Mass. In the early Church, individuals that had a grievance with one another went and asked for forgiveness. It was only after everyone was reconciled that the Mass continued.

The exchange of peace is a serious moment of reconciliation and preparation to receive Holy Communion. It is to be carried out in a respectful and appropriate manner either by a handshake or a bow of the head.

The Fraction Rite: During the Fraction Rite, the priest breaks the consecrated Host over the paten, places a small piece in the chalice and offers a prayer that “this mingling will bring eternal life to those who receive it”. This is a reminder of the shared communion held throughout the entire scattered community around the world.

“Lamb of God”: During the Fraction Rite, the people sing or say the “Lamb of God.” When the first Christians gathered for Mass, they called this action “the breaking of bread” (see Acts 2.42). The significance of this activity gave its name to Eucharistic worship. The breaking of the bread symbolizes the suffering that Jesus endured for us, while sharing it recalls the Last Supper. In the breaking of the bread the many individuals who have gathered are made one body by receiving Communion from the one bread that is broken and shared for the life of the world.

The Preparation Prayer of the Priest: The priest says a private prayer to prepare himself for receiving Holy Communion. And this prayer alludes to 1 Corinthians 11.29, where Saint Paul warned the faithful not to receive Holy Communion unworthily. The people after singing the Lamb of God, also pray silently preparing their hearts to receive the Lord present in the Eucharist.

“Behold the Lamb…”: Prior to receiving Holy Communion, the people express their unworthiness and pray for healing. The priest invites them to make this statement of faith by showing them the consecrated Host, now broken in two, above the chalice as he says “Behold the Lamb of God….” This statement is taken from two passages of Scripture. First, the priest quotes John the Baptist, who points out the Lamb of God to his disciples (see John 1.29), then he quotes Revelation (19.9), that those invited to the supper of the Lamb are blessed. This text reminds us that those who faithfully gather around the Lord’s altar and receive his Body and Blood in this life, will hopefully be gathered together one day to share in the rich fare in the banquet halls of heaven.

“Lord I am not worthy…”: The priest and the people then express their unworthiness to receive so great a Sacrament. This text originates in the story of the healing of the centurion’s slave (see Matthew 8.8 and Luke 7.6). The biblical words “my child” become the liturgical words “my soul” since the congregation seeks a general spiritual healing more than a specific physical one.

The Communion Prayer of the Priest: The priest receives Holy Communion while reciting prayers quietly. The prayers (“May the Body/ Blood of Christ keep me safe for eternal life.”) accompany the receiving of Holy Communion.

The Communion Chant: The people sing a hymn for the Communion procession. It begins when the priest receives Holy Communion in order to unite his communion with that of the rest of the assembly. Evidence for singing hymns during Holy Communion is quite ancient going back as far as the 4th century.

Holy Communion: As the Communion chant is sung, the faithful process to the altar and receive Holy Communion. The deacon and other ministers, if required, assist the priest. In USA, the faithful make a simple bow of the head before receiving Holy Communion. The priest and other ministers say “The Body (Blood) of Christ” and each person answers, “Amen.” The communicant is not to add anything to their response, for in answering “Amen” each person affirms his/ her belief in the real presence of Christ in the Eucharist. The formula “The Body (Blood) of Christ” and the response “Amen” have been in constant use since the time of Saint Ambrose in the 4th century.

The Purification of the Vessels: Following the distribution of Holy Communion, the priest or deacon reposes the Blessed Sacrament in the tabernacle. The priest then purifies the chalice and the paten, or may do so after Mass. As he dries the chalice, the priest quietly says this prayer: “What has passed our lips as food, O Lord, may we possess in purity of heart, that what has been given to us in time may be our healing for eternity.” The words of this prayer have remained unchanged since the 6th century.

The Silent Prayer of Thanksgiving: The priest returns to his chair and all observe a time of silent prayer; praising and thanking the Lord for his many gifts, especially for receiving him in the Eucharist. This period of silent prayer is not to be rushed nor is it a time of “dead air.” During this time, you can reflect on the following questions: What are you most thankful for? Having been nourished by the Body and Blood of Christ, in what areas of your life do you need the Lord’s help this coming week? How can I be more like Christ to others in my life?

Click below to read the rest of this 5 part series on the Eucharist...

A WALK THROUGH THE MASS: A STEP-BY-STEP EXPLANATION – 1

As Catholics, we know that the Holy Mass is the center of our faith and the source of divine life. Hence, the Church teaches us to participate in the Holy Mass regularly on Sundays and on Holydays of obligation and also on weekdays, whenever possible. If we understand...

END_OF_DOCUMENT_TOKEN_TO_BE_REPLACED

A WALK THROUGH THE MASS: A STEP-BY-STEP EXPLANATION – 2

Part two: Story telling/ Liturgy of the Word Liturgy of the Word: When we gather at a friend’s home for a meal, we always begin with conversation, telling our stories. At Mass, after the rites of gathering, we sit down and listen as readings from the Word of God are...

END_OF_DOCUMENT_TOKEN_TO_BE_REPLACED

A WALK THROUGH THE MASS: A STEP-BY-STEP EXPLANATION – 3

Part three: Meal sharing/ Liturgy of the Eucharist After the readings, we move to the table. As at a meal in the home of a friend, we 1) set the table, 2) say grace and 3) share the food (we eat and drink). At Mass these ritual actions are called 1) the Preparation of...

END_OF_DOCUMENT_TOKEN_TO_BE_REPLACED

A WALK THROUGH THE MASS: A STEP-BY-STEP EXPLANATION – 5