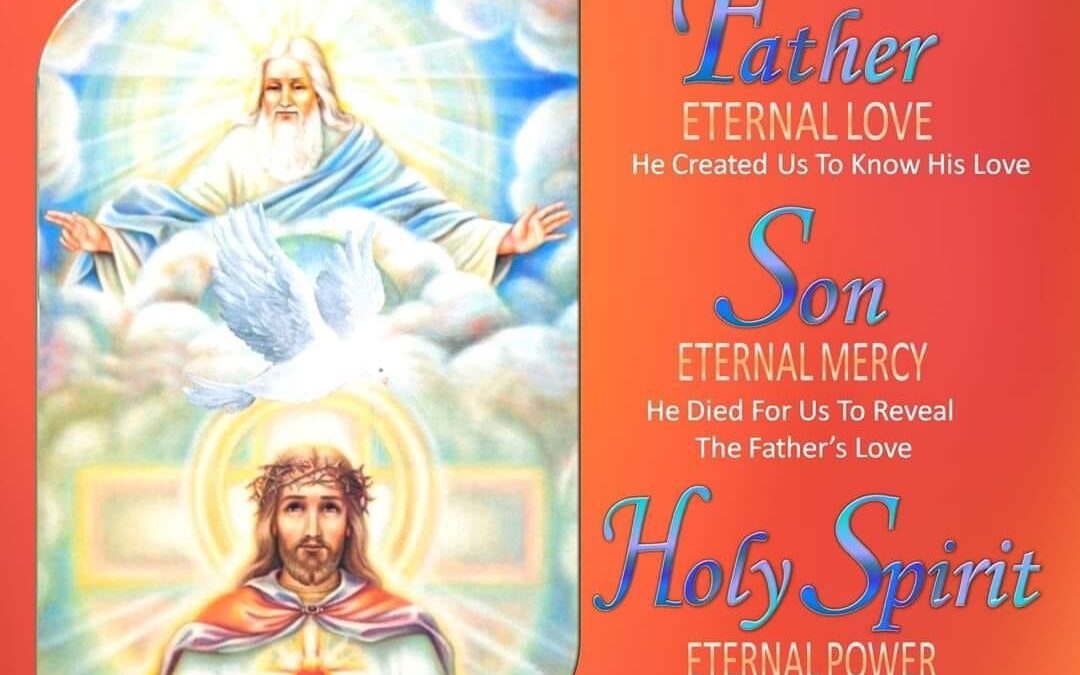 Today the church celebrates Trinity Sunday. It’s a great mystery, and trying to define the Trinity is like trying to pour all the water of the ocean into a hole in the sand. But certain symbols can help us meditate and reflect on the mystery of the Holy Trinity, like the triangle, the shamrock, the three forms of water, steam and ice which are substantially the same, etc.

But essentially, the mystery of the Holy Trinity revolves around the mystery of love between the three Persons in one God, the Father, the Son and the Holy Spirit. And that love is poured out to humanity, who is made in the image of God, so that we can love one another with the love of God who is Trinity.

What did Jesus say in the gospel? God loved the world so much that He gave His only Son, so that everyone who believes in Him may not be lost but may have eternal life (John 3:16).

Our problem is that we learn so many truths but they don’t mean anything to us. If they did, they would transform us. One such truth is that God is your father and loves you. He conceived you in his heart before the world was made. He knew your name and chose you for his own (Ephesians 1:3). He wanted a child whom he could love and with whom he could share his life and everything he has.

So, the Creator called you by name. You are his. He will always be with you. You are precious to him, and he will honor you because he loves you (Isaiah 43:1-4). Your parents may forget you, but he will never forget you. He has your image on the palm of his hand (Isaiah 49:15). You are co-heir with his only Son (Gal 4:7).

Why all this? It was to reveal his love for each of us that the Father sent his Son, Jesus. Because, no one knows the father except the Son and those to whom he has revealed him (Matthew 11:28). Jesus is the image of the invisible God and loved his own in the world to perfection (John 13:1).

Who are his own? Anyone who follows the light of his conscience belongs to Jesus even if he does not know him. Those who accept him as Lord and Savior become the children of his Father.

Many of us have been given a false image of God. Many see him as one who punishes and sends to hell, who tries to make life hard for us and sends us trials and sicknesses, who forbids just what we would like to do. He is vindictive and a spoil sport. These are false images of God. If anyone goes to hell, it is their choice, not God’s.

The Father welcomes us home like the father in the story of the prodigal son. He is so glad to see him again that he treats him not as a wastrel but as his beloved son (Luke 15:20). This is Jesus’ image of the Father. He is the God who gets down on his knees and washes our feet treating us as beloved and honored guests (John 13: 1ff). He is the God who gives himself to us till he can give no more and hangs limp on the Cross having poured out his life for us.