18TH SUNDAY IN ORDINARY TIME: GIVE THEM SOMETHING TO EAT YOURSELVES 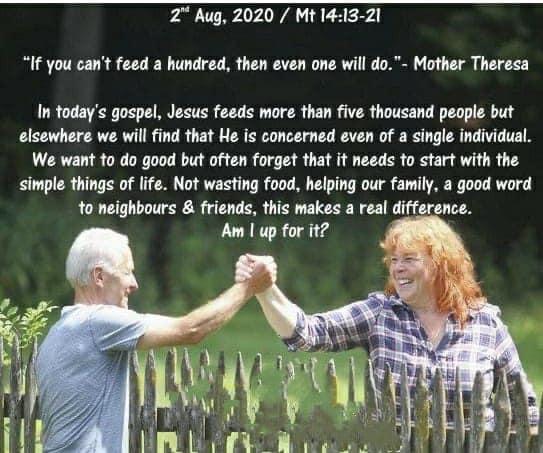 In the gospel, we hear about the miraculous multiplication of loaves that fed the crowd of 5000.

Obviously, the crowds do not know what was happening with Him and the battle He was fighting within. They went after Him on foot, and so as He stepped ashore, He saw a large crowd. But despite His need for solitude and to think about things and to mourn the death of John the Baptist, He took pity on the crowds and healed their sick.

And then when evening came, another situation arose. His disciples asked Him to send the crowds away so that they can get food for themselves. After all, He had already done enough for the crowds and they should leave Him alone.

What else could they expect of Him? His own needs were not met, and He was not obliged to see to their every need. But it was a lonely place, and that crowd of 5000 was getting hungry. And all they had was only 5 loaves and 2 fish.

Obviously, it was not enough and obviously there is nothing that the disciples could do about the hungry situation. And here is where we must believe that when we can’t do anything, then God can do something.

As St. Paul in his letter to Romans says: “Nothing can come between us and the love of Christ, even if we are troubled or worried, or being persecuted, or lacking food or clothes, or being threatened or even attacked. Because these are the trials through which we triumph, by the power of Him who loved us.”

Yes, God will fight our battles for us. And this is reiterated by the prophet Isaiah when he told king Ahaz as he was surrounded by his enemies: Stand by your God, or you will not stand at all.

So, like Jesus, we need to be kind and compassionate to others because they have battles to fight every day.

And just like Jesus, even though He had His own needs, He took on the needs of others and helped them fight their battles.

For all we know, when we take on the needs of others and fight their battles, our own needs will be met and God will win our battles for us.